Build your own personal airport and send hundreds of flights into the sky!

Airport City is taking off in two exciting modes: you get the chance to build a modern airport, and build a city to support it. It's not one of your average fun strategy games. It's a real life simulation game and more!

This Game's Got Wings

Zzz...Zzz...Zzz...: this is what it feels like every time I browse the app store on my iPhone for city-building games. Sure there are some gems out there that make the largely disappointing selection of games in this genre worth putting up with, but they are becoming rarer by the day. That's why it's like being hit with a refreshing Hendricks and Tonic at the end of a poor-quality-beer soaked evening when stumbling upon the diamond in the rough that is Airport City. Instead of simply managing a city for its own sake on a very shallow basis as is the unacceptable norm in this genre, this game actually has you thinking about the symbiotic relationship between the city that you manage and the airport that you control every aspect of. It's got depth, it's got balance, and most importantly, it's got freaking aeroplanes for god's sake!

The main draw of the game as well as the crux of the entertainment underneath the city-building surface is the fact that you get to build and manage a wonderful-looking airport complete with a variety of planes that you can eventually unlock as you make progress. But it's not just an airport management game, as the "city" suffix in the title quite rightly suggests: you've got a town to manage in conjunction with the airport as well. These aren't two isolated responsibilities either since you have to ensure the success of one in order to expand the other.

And so come your main responsibilities in the game, which consist of creating a well-balanced system of city and airport, with one feeding the other. For example, you'll have to construct entire residential areas in order to house a population that will potentially act as a customer base, allowing you to expand your airport and afford things like better power stations to feed your city and airport and other businesses to rake in money on the side. It's all about climbing the business ladder, or should I say getting higher in the business sky in a manner that doesn't even enter into other airport-based sims such as The Airport Game.

Between laying down runways, managing flights, getting yourself a hangar, and buying your first plane, you will notice that you're going to come up against a financial stoppage point. This is where the freemium aspect of the game sets in and although it isn't ruinous - you can quite happily get by for a while just grinding and playing for free - it does make things quite annoying if you don't happen to want to spend any actual money.

You see, when constructing things in your airport, you'll need Airport Cash, which is a rarity in the game unless you want to spend lots of coins, which is the game's regular currency. To afford more land to build your airport or town into you  will have to spend a massive amount of time grinding, which is where developers try and squeeze you for real-life cash. Many will be happy to hand it over of course, but with a website as slick as the official Airport City one, there is only so much trust one can put in a game.

I would say that Airport City is potentially a fantastic game, and one that is actually worth spending a little bit of money on. It obviously isn't as detailed in the aeroplane department as Pocket Planes, but its stunning 2D graphics and colourful design make the gameplay even more enjoyable and the game itself one that truly stands out in spite of its freemium downfalls. 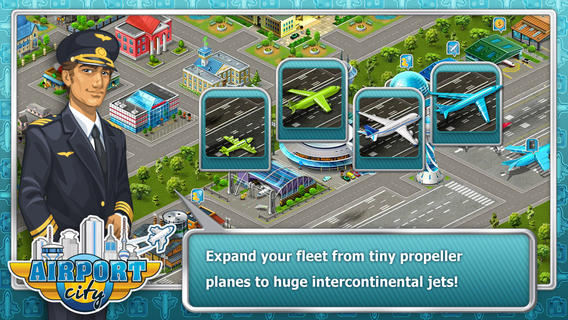 Airport City is developed by GIGL.